Well, friends – I’ve said it before and I’ll say it again –  no adventure is any good without a little misadventure, and based on that standard, this trip was one for the books.

This Grecian dream first became a reality when I was enjoying one of my favorite pastimes during a lunch break – looking up flights ok Kayak – and I noticed dirt cheap flights out of DC to Athens. I immediately called Bryant three times, causing him to step out of a meeting because he was afraid it was an “emergency” (it was), and we ended up booking the tickets after taking a few days to think about it.

I should now mention that these cheap tickets were with Russian airline Aeroflot, and that our layovers were in Moscow. When we bought the flights, we had a 2 hour layover on the way there, making our travel time about 14 hours (great for US to Greece). On the way back, however, we had a 17 hour layover in Moscow. We were actually really excited about this, thinking we’d be able to see some of Moscow – the Kremlin, Mummy Lenin, etc. – a city we’d likely never visit again.

About a month after we booked,  I realized I’d booked the flight in my maiden name, then sent my passport off to be renewed in my married name. This is a big, bad problem…it’s not easy to change your name without paying tons of fees. Just ask Adam West.

After realizing that, our flight from Moscow to Athens was cancelled,  making our layover 11 hours instead of 2.

We then realized that Vayama, the online booking agent we used by Kayak’s recommendation, was completely useless in helping us navigate these changes, and I spent hours on the phone over the period of a month getting a different answer from every person I talked to. Cheers! Don’t use Vayama. Ever.

About a month before the trip, I was finally sent confirmation that I could get on the plane – which was a little nerve wracking.

STEP 2: Make the most of a long layover.

I always imagined Russia to look very bleak and grey, and maybe that’s still true for Moscow proper, but I was surprised how green and forested the outskirts of Moscow were from the air. It was actually quite lovely. The airport (SVO) was also nice. We complained about our cancelled flight and resulting layover at the Aeroflot desk, and 10 minutes later we were following a tall, blonde speed walker who handed us off to a mustached lady who let us to a charter bus. A whole charter bus for four of us…

We drove right across the runway to a security gate and were taken to a nearby hotel, where we checked in, were escorted to a floor with a security guard, and left to rest. I keep referring to this as “house arrest” because the security guard was there to keep us IN, not to keep others OUT. But the room was simple and clean and we slept a full eight hours and were given a free meal before being escorted back to our charter bus, this time full of foreigners like us.

Upon arriving in Athens from Moscow, we caught the very last train of the night from the airport into town. A sudden concern for our own well-being after sitting on a airplane for so long inspired us to carry our luggage up six flights of stairs instead of taking the teeny refrigerator-sized elevator up. When we finally threw our stuff down in the room we were ready. to. crash.

UNTIL…we realized we had a private balcony with this view:

Hmmmm wat? I booked this hotel thinking it was barely not a hostel, but it was actually the greatest. The Acropolis is a sight to see, especially lit up at night, just looming 512′ over the rest of the town. Bryant and I jumped up and down on the balcony, before heading to the rooftop garden to enjoy the view. Heading to Athens anytime soon? I can’t recommend A for Athens enough.

STEP 4: Only spend one day in Athens.

Once the sun rose on our beautiful view, you could see the abundance of graffiti and trash that covers Athens. I wonder what Athens would look like had spray paint not been invented? Hard to say. We headed to the Acropolis first thing after breakfast on the rooftop garden of our hotel, as we’d heard it gets very crowded in the early afternoon.

People have been building and destroying things on the Acropolis since the FIFTH CENTURY B.C. – let that sit for a minute. The views from the top of the ‘crop (TM) were beautiful – Athens just seems to go on forever.

We arrived thinking we’d be able to take a self-guided tour but were surprised that few artifacts/structures had so much as a plaque telling what we were looking at. I left feeling like a failure who needed to take a class in Greek history, or at least watch a documentary. I imagined Plato giving me a chastising glance at my lack of historical appreciation for what I was seeing. But then things started to look like this:

So we got the heck outta dodge.

We walked around the old town the rest of the day, through a bunch of flea markets and shops and the National Gardens. I bought a new purse and Bryant fell down some stairs and spilled his coffee all over himself. All in a day’s work. We got some gyros for two euro and watched the sun go down on a Greek rap battle from our hotel balcony.

If you’re a regular gal like me and are spending a week in Greece, not an aimless backpacker with an affinity for Greek history, don’t spend more than a day in Athens. We enjoyed our day, but I don’t know what we would’ve done with another one.

When heading to Santorini, Ryanair, one of the dirt cheap airlines in Europe (I once flew across Spain for 12 euro), is the way to go. Flights from Athens to Santorini are only about 45 minutes and only marginally more expensive than a ferry, which will take you 5-8 hours. Ferries are a great option for getting from island to island, but fly from the mainland to Santorini.

I consulted Santorini Dave to determine that Oia was our place. You should too: http://santorinidave.com/

I am a huge fan of Air B&B, and it’s gotten so popular you can find a place pretty much anywhere these days. Air B&B is a website that allows anyone to rent a shared room, private room, or whole place out to travelers. I’ve had several great experiences with this service, and you get a lot more bang for your buck than you would at a hotel. We stayed at an incredible villa in Oia, the “postcard” town on the island. If you’ve seen the pictures of whitewashed houses stacked on top of each other, they were probably taken in Oia. We stayed at the Villa Marina, and it was perfect. So perfect, in fact, that there were constant crowds at the entry gate to our place trying to take pictures. 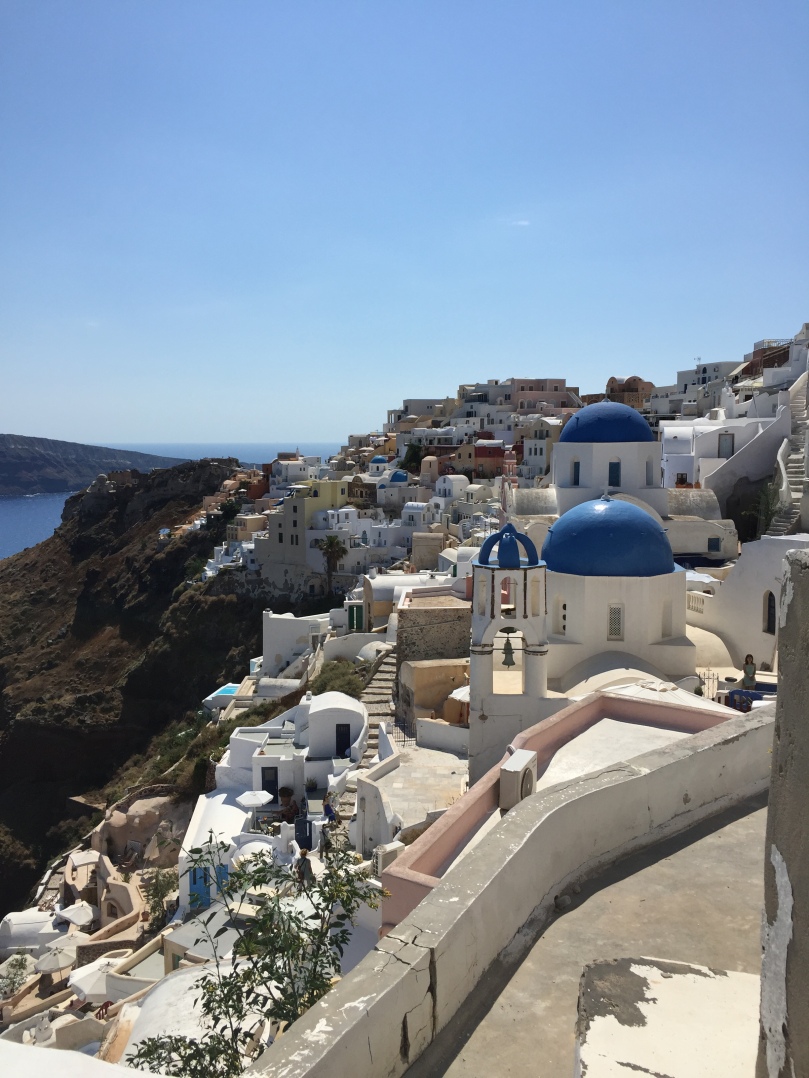 Here’s how we ate well and had a blast without spending tons of money:

FOOD: We packed quite a few snacks in our backpacks (cheddar bunnies, cliff bars, etc.) so we wouldn’t feel the need to buy snacks in the airport or on the island. We also went grocery shopping on our first day and bought some basic items so we didn’t have to eat out each meal. Instead of splurging on every meal, we ate a lot affordable and delicious crepes and splurged on a few meals here and there. Our BEST meal on the island (maybe our best meal ever?) was at Roka, our second-best at  The Red Bicycle, and we also paid an outrageous price for some fresh-as-it-gets scorpion fish at Katina. Our favorite breakfast/dessert place was Melenio Café – unreal fruit and yogurt parfaits and good coffee for breakfast, endless amazing desserts for after dinner.

FUN: Renting four-wheelers is a must – you can drive them all over the island and spend days exploring the other villages and beaches. Take these (sort of) trusty steeds to the lighthouse for some spectacular views, to Perissa to drive along the beach, and park in Fira to explore.

One thing to note about Santorini is that it’s not a “beach” place – there are several beaches, but they aren’t what you’d expect. The Red beach and White beach can barely be called beaches (my humble opinion), and the black beach (Perissa) is pretty great except for the fact that the sand is black and will blister your feet – flip flops are a must! If I were you and you were me, we’d spend a day at Perissa and skip the others. Amoudi Bay in Oia is the best place for swimming, but is more like what we’d call a swimming hole in the states. All rocks, platforms/cliffs/rocks to jump off of, etc. The water is gorgeous and crystal clear, but very chilly even into June when we went.

Here’s Bryant doing a gainer at Amoudi Bay. He lived.

Our big fun splurge was a sunset catamaran cruise that included snorkeling, dinner, and a stop at the hot springs (skip these, they are lukewarm at best and will ruin your bathing suit). That was easily one of my favorite days, and I’d recommend it to anyone visiting the island. There are many companies offering this type of cruise for similar prices.

Finally, I’ll end this post with the donkey rides. You may have seen movies that were set in Greece, and seen people gracefully ride a donkey sidesaddle to their quaint accommodation. This is a lie.

First, the donkeys are mules, and the rides are only available from Amoudi Bay up to a residential area in Oia. It’s strictly a touristy thing. The day before we took our mule ride, we watched from our balcony as a mule spooked and took off up the hill with a girl as she screamed “STOP” over and over in the most blood-curdling voice I’ve ever heard. I think she will be scarred for life.

But, since we are decent horseback riders and it was only 5 euro, we decided to do it anyway. It was hilariously miserable – our mules jostled each other like a group of preteen boys trying to win a three-legged race all the way up the hill, dragging our legs on rocks and running into each other the entire time. The pinnacle of suffering came when another mule turned the corner in front of me, stopped, and pooped DIRECTLY on my thigh. DIRECTLY ON THERE. I think my face in the photo below just says it all. Bryant and I will probably laugh about this experience fifty years from now. It was terrible and everyone should do it.